It's been such a long time since I posted here - nearly three months - that I hardly know how to start writing.   It's not that there's been anything overly dramatic happening that has kept me away, just an accumulation of too much.   Too much distraction, too much general illness, too much tiredness, just too much.  Anyway, I'm back for now - not promising anything more than that, just to say hello and let you know we're all still alive here!

So what have I been up to?

We had a first trip of the year over to Scotland to do a couple of folk club gigs last month - it was harder than usual to get ourselves wound up and started, but by the third gig we were back in our stride again and the fourth gig of the week, when we got back home again, was superb. Great energy.

My extra two new choirs have been enjoyable but I'm finding it hard to keep my energy up for three nights a week, especially during the dark months, driving on country roads and leaving a roaring fire after an early dinner.   Now with the brighter evenings it's not quite as bad.   But the one off workshops I've been doing -for International Women's Day and for Earth Day, have been very enjoyable.   I think I'd like to do more of those.

Recording wise we're making good progress, finishing songs and getting guide tracks completed, ready for other musicians to add sparkle to them.   We are launching a crowdfunding campaign to presell that CD and get people involved with the process.   Here's the link if you're interested in contributing.  You can hear one of the songs which will be a single - People - in the background of the video. 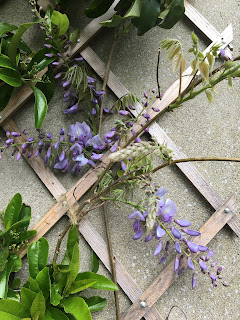 The garden is starting to perk up and I'm so excited to see that my wisteria has finally bloomed - I've always loved seeing very old wisteria after being in a house once on Orkney where the conservatory was just full of blooms and from there the whole house was filled with the heady smell.   I think I planted this one 5 years ago and patience has finally won out.
Over Covid I've had more time to play with paper and paints and have dabbled with junk journalling which I really enjoy - it's great not to have to be brilliant at something and just enjoy sticking things in a book with glue. 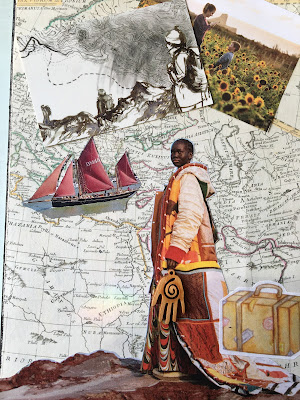 and playing with found poetry 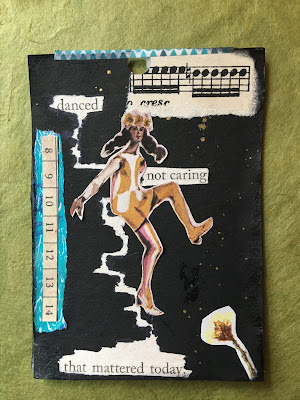 I think the best part of this pastime is all the bits to be bought - sweetie shop for grown ups lol.
I have been dropping in from time to time to catch up with your writings and I was very grateful to Susan for getting in touch a while back to see if we were ok - I appreciated it so much Susan and hope I didn't scare you off with my ranting - it wasn't the best day when I wrote back !
Take care everyone and belated Bealtaine greetings.