It feels like February has been spent entirely on the computer, doing publicity for one show or another and getting stuff ready for the various internet spaces.

So I really enjoyed taking an hour out today in the unexpected sunshine to take a few pics and think about this month's clues for  Hawthorn's aka Kate's Scavenger Hunt - it really is a great way of slowing the month down for a moment and taking stock.

It has been such a stormy month - each weekend seems to blow harder than the one before - and there's another storm on the way today ... but I am so grateful that we haven't had the same problems as our neighbours over in England .... I just couldn't bear that flooding ... I hope you all are safe and dry enough.
So this month's words ....

We've never been into Valentine's Day here - 33 years I'm waiting for a card!!!  But then he hasn't received one either lol - too stingy to pay for a card - plus it's close to our anniversary and if we manage to remember that we sort of combine the two.

I spotted this lovely heart shaped stone on the beach ages ago and thought it might fit the bill for today. 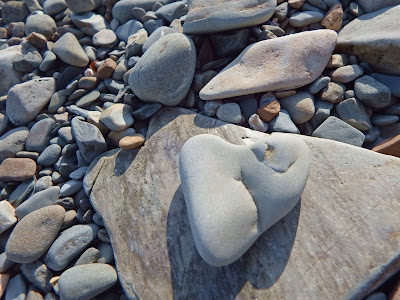 The beach is a total mess at the minute after all the storms - and the mussel boats along here cut the seaweed as they go which then all lands up in an icky mess ... this is just one part of it ... all of that used to be grass.  Once these storms pass we'll get a crew together for a beach clean up day. 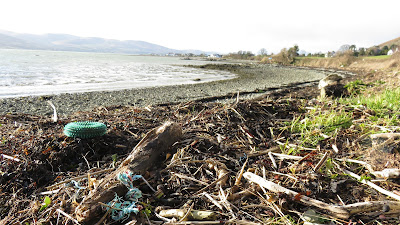 The Nissan Hut at the bottom of our lane lost even more of its roof during storm Dennis, or was it Ciara?  - it really is on its last legs and the guy who owns it keeps trying to nurse it along rather than abandoning it.   It came from the German POW camp in Rostrevor when it was dismantled after the war - one of the last still surviving.  I've been in for a nosey and unearthed lots of interesting stuff. 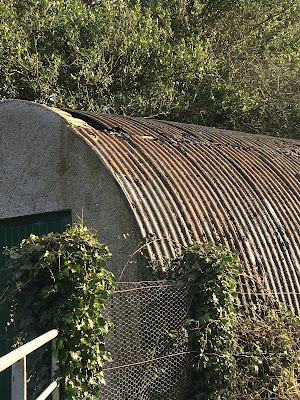 That'll have to be Red the squirrel....
The sun came out for a short burst one day last week in the middle of the pouring rain and who ambled in!  I managed to get out the back door without disturbing him - isn't that tail just fabulous!  He looks like he has a mohican haircut ... and he certainly didn't go hungry this winter! 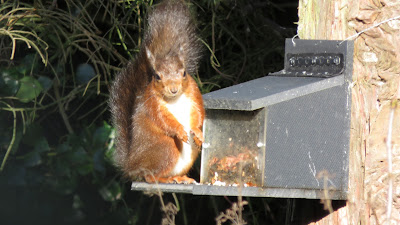 Take your pick!
You know my other half is a percussionist ... at some point in a recording they were looking for a jingly sound and the 'keys' were brought out!  And they've been added to down through the years - even at gigs, people would give us spare keys to add to the chain ... Mostly now it just hangs up in the music room/studio collecting dust 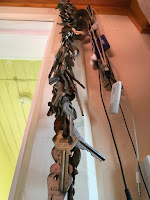 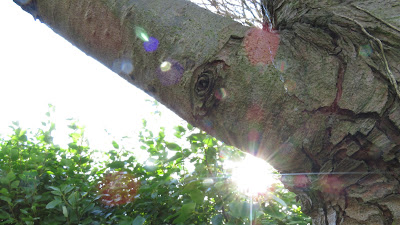 The trees are still all bare and showing their beautiful barks with all their knotty details.   I love the shape of trees at this time of year.

Meet Bob the wounded crow - this is a terrible photo - I can't get close enough to him ... he's been hobbling around the garden for the past month or more - looks like he has a broken wing - probably in the storm.  He stands under the feeder waiting for the wee birds to drop something for him and of course he's getting fed scraps.   It's really funny watching him eyeing up the feeder, head cocked, one eye focussed.   But I'd love to be able to help him fly again - usually crows aren't my favourite birds, but he's not annoying the other ones and the squirrel doesn't quite know what to make of him.  We've still been pondering getting another cat, but the wildlife is so good around here we'd miss all the drama if a furry beast was chasing them.

So I'm off now to have a look around everyone else's photos for this months' words.  Thank you Kate for keeping this going.